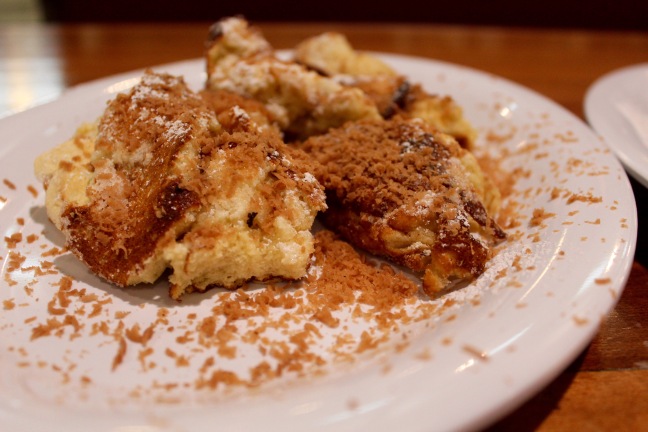 In the midst of Downtown LA you can find BierBeisl Imbiss, a café – or better literally translated “snack bar” – serving modern Austrian street food. The owner and chef Bernhard Mairinger, an Austrian but resident in Los Angeles, has established BierBeisl in the city, and still has boundless entrepreneurial-like vision for the years to come.

I visited this place on a weekday evening, along with some colleagues (an Austrian and two Americans). The food game in Los Angeles is strong, and although many don’t know what to expect from the Austrian cuisine, expectations were naturally high.

With wooden benches, an open view kitchen and hospitable staff, this café felt immediately like a home, tucked away between towering Downtown buildings. The menu was flooded with the finest exotic offerings: Stiegl, Kartoffelsalat, freshly grated horseradish and Leberkäse. Special attention was paid to authenticity in BierBeisl, for example, there is a bakery attached which ensures the Leberkäse is accompanied by fresh semmel by regional standards.

We began by stuffing ourselves with fresh Pretzels, Schwarzbrot, a cheesy quince dip (I feel this was the American influence seeping in) and steins of beer and Radler. Next came the Leberkäse or, as my American colleague passionately described it – an ‘awesome hot dog burger’ – along with the award winning sausages. Yes, we can ensure you the Käsekraner (cheese sausage), Hungarian and WeißWurst thoroughly deserve the #1 spot on the Discover Los Angeles best sausages list. 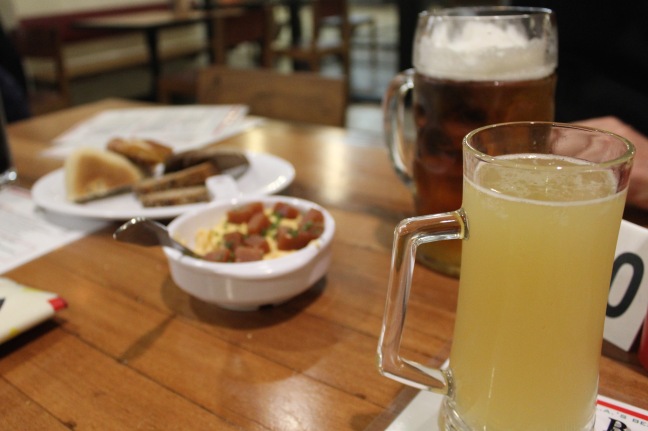 Enough with the build up. Here’s what we came for – the Kaiserschmarrn. We watched as Mairinger swiftly crafted three variations of the desert for us to enjoy – effortlessly serving them alongside two compote variations.

I’ll start with the texture – the most melt-in-your-mouth Kaiserschmarrn I’ve ever tasted. The pancake mixture had a delicately crispy shell, which instantly dissolved to leave a non-eggy pancake that was both light and wholesome. No messing around with small pieces, the Schmarrn was very loosely chopped, rather folded, which meant you retained the steaming hot freshness as you took a mouthful.

The selection of flavours was outstanding. The chestnut Schmarrn had the most sophisticated feel. The shavings of chestnut, complimented best by the chunky apple and rhubarb compote (with plenty of cinnamon) gave it a very wintery taste. The raspberry Kaiserschmarrn was unanimously the favourite of the evening – the berries were mixed into the pancake mixture in the pan, eliminating the need for the side-serving of compote (a technique I’ve only seen once before in Gabühelhütte). It moistened the dish even further, and the juices from the fruit burst over the pancakes, creating a sugar coating with slight raspberry glaze. With every forkful came more exclamations of delight from each one of us, as we constantly struggled to find another ‘mmm’ noise to express how delicious each mouthful was.

Although the quantity defeated us, the waiter packed the leftovers in boxes for us, even providing a takeaway tub for the compote, meaning we could bring it into work the next day for mid-meeting fuel (I like that this is becoming a more regular concept!).

So thank you to BierBeisl for giving us such a wonderful evening, and most importantly, delicious Kaiserschmarrn. For anyone visiting or living in Los Angeles – this place should be on the map.